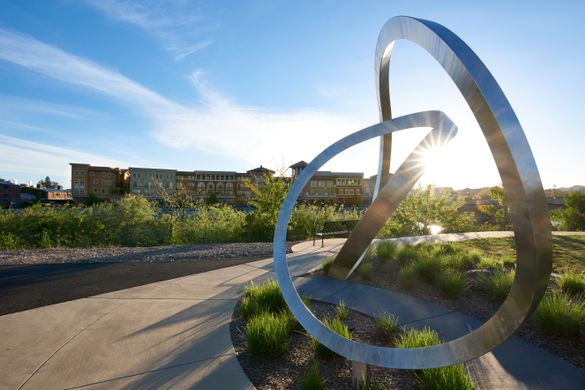 New Arts District Launches in the City of Napa

the first art district in the Napa Valley. Inspired by visually innovative arts districts in urban areas around the world, RAD launched in the City of Napa in January 2017 and extends along a widely used 1.7-mile section of the Napa Valley Vine Trail.

The new arts district runs parallel to the Napa Valley Wine Train tracks in semi-industrial and residential neighborhoods, located in the heart of the City of Napa from Vallejo Street to Redwood Road along Solano Avenue. Initial funding of $100,000 was committed by the Vine Trail and Wine Train. The effort is designed to revitalize Napa’s commuter corridor to become an area where locals and visitors are surrounded by renowned art as part of the city’s growing arts and culture scene.

“RAD Napa is great new addition to the Napa Valley, which will inspire discussions, build connections, empower artists, and spark economic opportunities within our community,” said Chuck McMinn, founder and board president of the non-profit Napa Valley Vine Trail Coalition.

Three murals created by world-renowned artists are the first of dozens of works of art that RAD Napa hopes to commission in the coming years from both local and international artists. The first mural, “Knocking on Heaven’s Door,” was created by Bezt and Natalia Rak, two Polish artists known worldwide for their street art. The fanciful, 210-foot work, which was completed in January 2017, depicts a woman reaching toward a glowing butterfly.

The second work, “Chromadynamica,” completed in March 2017, is a 100-foot colorful abstract, with pixelated colors contrasting black and white elements. The piece is by Argentinian-Spanish graffiti artist Felipe Pantone, whose art may be seen in the U.S. as well as Europe, Asia, and Australia.

The current installation’s third mural, titled “Floating Napa,” was completed in April 2017 by Barcelona muralist Cinta Vidal. Her work includes scenography, backdrops and murals that may be found worldwide. She refers to her Napa work as “ungravitied constructions.”

Another RAD project in the works is the “Napa Community Quake” mosaic, designed to honor and memorialize those affected by the 6.1 magnitude South Napa earthquake in  August 2014. This piece will be constructed primarily from household objects which broke during the quake and contributed by community members. The mosaic will be installed on a rail car donated by the Napa Valley Wine Train and placed on Soscal Street below Vallejo Street in 2018.

An abundance of public space has been designated for RAD Napa – including up to 50 walls for murals, 15 locations for sculptures, and future plans for landscaping and gateway features. The local arts community hopes the area will act as an outdoor museum offering a rich cultural experience.

Future art works will be selected through a collaborative process of public engagement with the shared vision of creating a dynamic cultural experience in an outdoor environment. For additional information on RAD, visit http://www.radnapa.org