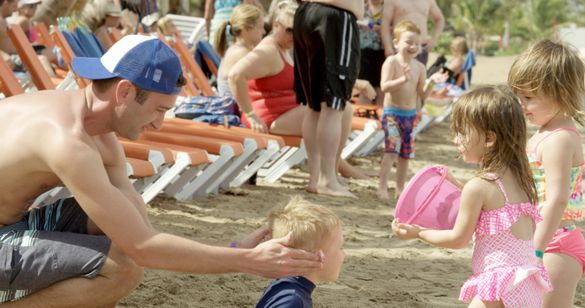 SAN JUAN, Puerto Rico, April 3, 2018 – The Puerto Rico Tourism Company (PRTC) announced today a surge in visitors across the Island over the Easter and Passover holidays and Spring Break. From the island of Culebra off the northeast coast to the southwest region of Cabo Rojo, small family-owned inns to major hotels throughout the Island, as well as in San Juan, were bustling with crowds enjoying the beaches, diverse attractions and nightlife over the long weekend. This is evidence of U.S. travelers’ growing trust in Puerto Rico’s readiness to welcome them again.

“We’ve been encouraging travelers since late December to visit and see first-hand our comeback for themselves. Alongside the reminder that one of the best ways people can support Puerto Rico is by visiting – staying at hotels, eating at restaurants, enjoying our Island’s activities, and buying from local businesses, our ‘we’re open for tourism’ message is being heard loud and clear,” said Acting Executive Director of the PRTC, Carla Campos.

With the recent launch of its new creative online videos, PRTC is reminding travelers that Puerto Rico is ‘Ready to Enchant You,’ and preliminary Spring Break numbers are showing that many travelers are taking the Island up on that offer. With data showing record-breaking performance amongst the 130 hotels that are currently greeting visitors, the outlook of tourism is very positive for the rest of 2018. Responsible for contributing roughly 10% of the GDP, tourism is not only vital to the Island’s economy – it’s a cornerstone of Governor Ricardo Rosselló Nevares’ economic development agenda.

In addition to plenty of unique attractions to enjoy and accommodations to stay in, big ticket events are also back.

With Spring Break underway and summer travel around the corner, U.S. travelers can get great deals to Puerto Rico right now. With flights averaging $250 round-trip, no U.S. passport required, English widely spoken, no currency exchange and direct access from most major U.S. cities, Puerto Rico is expected to continue to experience a surge in travelers this year.

About the Puerto Rico Tourism Company

The Puerto Rico Tourism Company (PRTC), founded in 1970, is a public corporation responsible for stimulating, promoting and regulating the development of the tourism industry. It markets Puerto Rico as a tourism destination through advertising, public relations and promotional activities; promotes tourism among visitors and local residents; provides visitor orientation and technical assistance to investors; evaluates tourism facilities and establishes standards of quality; and regulates and oversees gaming operations. PRTC has offices and representatives in the U.S. mainland, Canada, Europe and Latin America