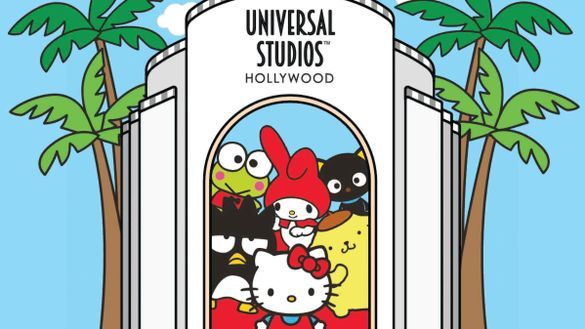 In true Hollywood fashion, the spotlight shines brightly on Hello Kitty and her friends from Sanrio, including My Melody, Keroppi and Chococat, as they star in a selection of park-exclusive merchandise, including accessories, apparel, stationery, souvenirs and collectibles.

An array of delectable confectionery—prepared fresh daily—is also available, including such tasty treats as Hello Kitty, Chococat and Keroppi themed s’mores, and a variety of Hello Kitty themed fudge, cupcakes and caramel apples.

Highlights of the exclusive product offerings feature designs incorporating Sanrio characters into classic Universal titles such as Jaws, E.T. The Extra -Terrestrial, Back to the Future and more, as well as the group enjoying a variety of Universal Studios Hollywood theme park attractions, from the world-famous Studio Tour to “Jurassic Park—The Ride” and “King Kong 360 3D.”  New park-exclusive merchandise will be released regularly.

Hello Kitty will also make special appearances just outside the entrance of the Animation Studio Store. Making her Hollywood debut in a red pleated dress embellished with film strips, Hello Kitty will meet and greet fans near a collection of Sanrio-themed topiaries, including My Melody, Keroppi and Chococat, and window displays featuring the characters making movies and enjoying the Universal Studios Hollywood experience.

In addition to Hello Kitty, the Animation Studio Store will feature an array of merchandise from Illumination Entertainment films, including Minions from the blockbuster Despicable Me film franchise, and DreamWorks Animation, including memorable items from Kung Fu Panda. A selection of products from other favorite animations will also be available, including Dr. Seuss, Scooby-Doo, Curious George, SpongeBob SquarePants and “The Simpsons.”

The Animation Studio Store sits at the heart of Universal Studios Hollywood in a new 6,000 square foot structure that draws its inspiration from California Mission revival architecture reminiscent of the Golden Age of Hollywood in the 1930s. Fusing style with whimsy, the retail environment weaves nimble animated characters into the fabric of the Spanish architectural design from the wood detailing to the stucco, wrought iron and painted tiles.

The Carl Laemmle outdoor courtyard situated adjacent to the Animation Studio Store pays homage to the filmmaking pioneer and founder of the Universal movie studio inviting guests to dine or relax amid a decorative fountain surrounded by luscious greenery.

Sanrio® is the global lifestyle brand best known for pop icon Hello Kitty®, and home to many beloved characters including Chococat®, My Melody®, Badtz-Maru®, Keroppi® and Gudetama. Sanrio was founded on the ‘small gift, big smile®’ philosophy – that a small gift can bring happiness and friendship to people of all ages. Since 1960, this philosophy has served as the inspiration to offer quality products, services and activities that inspire unique consumer experiences across the world. Today, Hello Kitty’s legendary breadth of products is available in over 130 countries and in retail locations including department, specialty, national chain retailers and Sanrio boutique stores. To learn more about Sanrio, please visit www.sanrio.com and follow on Facebook, Instagram and Twitter – @sanrio, @hello kitty.