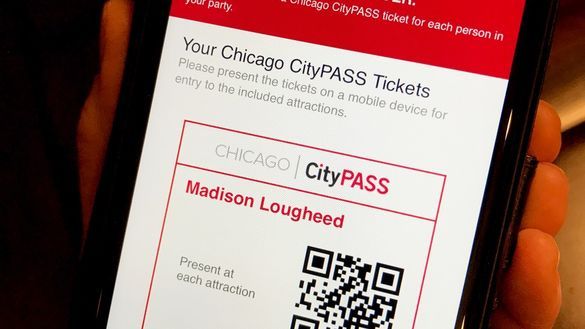 Chicago (April 16, 2018) — The Chicago CityPASS® program recently launched a mobile ticket option for travelers seeking bundled, discounted admission to the Windy City’s top attractions. CityPASS ticket products, which are available in 12 major North American destinations, have always been designed to make travel easier and less expensive. While the Chicago CityPASS program will continue to excel at both goals—allowing expedited entry and saving visitors 50 percent or more off combined admission to the included attractions—the mobile ticket option adds yet another level of convenience.

In addition to providing CityPASS buyers with an on-the-go option (tickets can be purchased on the steps of an attraction and presented for entry just moments later), mobile tickets are delivered to the traveler’s phone in the language they selected when they first visited the CityPASS website. For international travelers, it is especially accommodating to have an end-to-end translated experience in the language of their choosing (language options include Chinese, English, French, German, Italian, Portuguese and Spanish).

The Chicago CityPASS program includes prepaid admission to Shedd Aquarium, Skydeck Chicago and The Field Museum, as well as a choice between the Museum of Science and Industry and 360 CHICAGO Observation Deck, and a choice between the Adler Planetarium and Art Institute of Chicago. The included tickets are valid over a period of nine consecutive days, beginning with the first day of use. 2018 Chicago CityPASS prices (valid through Feb. 28, 2019): $106 for adults; $89 for children (3-11).

Mobile tickets—which are also available for the New York, Philadelphia, Tampa Bay and Toronto CityPASS programs—will work in the same manner as printed CityPASS ticket booklets, although instead of scanning a printed ticket at the attraction, visitors will scan their phones. Mobile tickets, as well as ticket booklets, can be purchased online at CityPASS.com.