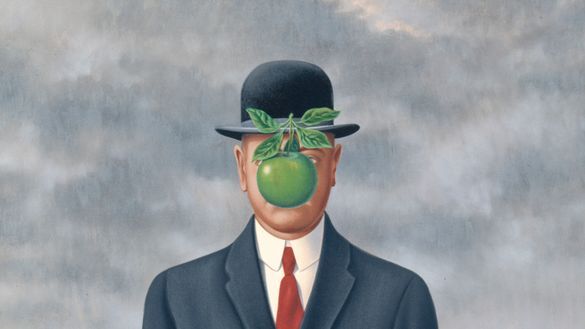 SAN FRANCISCO, CA (March 6, 2018)—René Magritte, the extraordinary surrealist painter, faced a question of conviction in the 1940s. As Europe was overwhelmed by the horrors of World War II, Magritte’s production was transforming in ways that surprised even the artist’s closest colleagues and advocates. Already in possession of his classic style of painting, honed over the previous two decades, Magritte suddenly began to make images that looked almost nothing like his previous work. In this era of instability and upheaval during the German occupation of Belgium, he questioned the role of art and looked for a new direction and new meanings.

René Magritte: The Fifth Season—presented exclusively at SFMOMA from May 19 through October 28, 2018—focuses on the latter half of Magritte’s career, from approximately 1943 to 1967, a period of remarkable transformation and revitalization for the artist. With loans from North and South America, Europe and Asia, it is the most complete presentation of Magritte’s late work mounted since the artist’s death in 1967. With more than 20 artworks being shown for the first time in a U.S. museum, and the first concentrated examination of Magritte’s sunlit surrealism and gouaches in this country, it marks a major milestone in the artist’s exhibition history.

“Magritte’s paintings opened up whole fields of inquiry that are still being explored by artists today,” said Caitlin Haskell, associate curator of painting and sculpture at SFMOMA and curator of René Magritte: The Fifth Season. “My hope is that those who don’t yet know Magritte will visit and encounter a painter who inspires them to question their surroundings; while those who are familiar with his work will be able to discover new sides of a supremely fascinating artist, who understood that the insights we find in paintings can affect how we see the world.” 70 oil paintings and gouaches, presented in a series of immersive galleries, reveal Magritte as an artist especially attuned to the paradoxes within reality. The subtitle “The Fifth Season”—taken from one of Magritte’s paintings made during the war years—evokes an alternative realm and references the artist’s belief in the special capacity of art to awaken us to new possibilities. Sometimes unsettling and often humorous, Magritte’s powerful paintings draw us into a parallel universe that seems to exist simultaneously with the recognizable world and challenge us to reconsider what is real.

SUNLIT SURREALISM AND THE VACHE PERIOD

René Magritte: The Fifth Season begins in the 1940s, when the artist’s work shifted in a surprising way, rebelling against both the experience of war and surrealist orthodoxy. During this “sunlit” period, which lasted until 1947, Magritte worked in a pastiche of Impressionism, with thick, hazy atmospheres and saccharine tones. Magritte’s vache paintings marked a second, shorter-lived period of rebellion in which he combined the bright colors and aesthetics of popular cartoons with loose brushwork parodying Fauvism and Expressionism, as seen in his work Seasickness(1948).

Frequently considered anomalies in Magritte’s production, the sunlit surrealist and vache paintings are shocking in their departures from the artist’s long-established iconography, style, palette and paint handling. Following his classic Surrealist style, which was grounded in the artistic influences of modern film, popular advertising and the imagery of Giorgio de Chirico, the sunlit surrealist works make unexpected references to 19th-century masters such as Pierre-Auguste Renoir, while certain vache works evoke the paintings of Vincent van Gogh and James Ensor. The subject matter of both series is as striking as the radically different styles the artist employs. The painting The Fifth Season (1943), one of the few images to depict Magritte’s familiar bowler-hatted men in the sunlit style, offers a rare look into this unique manner of painting, revealing an artist grappling with a range of emotions and reevaluating the possibilities for painting in a time of war.

Conspicuously paintings about painting, the five artworks in this gallery exemplify Magritte’s approach to art-making as the solution to a “problem” posed by a given object or idea. Taking on the problem of “the window,” Magritte devised compositions that demonstrated, in his words, “How we see the world” by painting pictures of landscape paintings on easels that seem to merge with the vista through a window behind them. While Magritte developed this painting style in the 1930s with Human Condition (1933), his return to the construction and embellishment of it in the 1950s—seen in such paintings as Where Euclid Walked (1955)–created astonishing illusions that encourage understandings of objects as both inside and outside, real and represented, natural and artificial, original and copy.

The 1950s found Magritte continuing to contend with the role of painting in postwar society, but doing so through a return to his exacting signature style. Magritte’s work during this decade is characterized by “hypertrophy,” a jarring alteration of scale among familiar objects that creates an unnerving effect. Among the best known expressions of this idea, Personal Values (1952) depicts a bedroom framed by cloud-filled walls, with an oversized comb and shaving brush dwarfing the furniture on which they rest. This wonderful and perplexing painting, acquired by SFMOMA through a gift of Phyllis C. Wattis, is one of the cornerstones of the museum’s collection, and 2018 marks the 20th anniversary of its acquisition.

Personal Values is joined in the exhibition by four remarkable paintings from this series, making it the most complete presentation of the hypertrophy works to date. Among the highlights are two versions of The Listening Room (1952 and 1958); The Anniversary (1959); and The Tomb of the Wrestlers (1960). In each work, a small, everyday object has been enlarged to a grotesque size, filling an entire room from floor to ceiling.

Among Magritte’s best known paintings are men dressed in bowler hats, a recurring motif he painted in various forms more than 50 times between 1926 and 1966. Particularly in the 1950s, the motif became so closely associated with the artist to be understood as an alter ego. Ultimately, Magritte used the easily recognizable man as a compositional element and a framing device that allowed him to play with the relationship between humans and their surroundings. The exhibition includes numerous examples of the well-known figure—the notable The Son of Man (1964) as well as The Happy Donor (1966), in which the silhouette of a bowler-hatted man is filled with a twilit landscape and starry sky. The figure may be perceived as a window into an idealized version of the natural world, or, conversely, one may see it as nature obscuring the man.

ENCHANTED DOMAIN AND THE DOMINION OF LIGHT

Another highlight of the SFMOMA exhibition is four of the eight rarely-seen canvases from The Enchanted Domain (1953), Magritte’s monumental 360-degree panorama and his largest work. The mural, 236 feet in circumference, was commissioned for a circular room in the Grand Casino in Knokke, Belgium. Magritte created the eight oil paintings that established the design of the frieze on a 1:6 scale. SFMOMA’s presentation marks the first time in 40 years that this many of The Enchanted Domain works have been seen together in a museum exhibition. Adjacent to The Enchanted Domain is Magritte’s exploration of contradictory qualities in paintings of paradoxes. The Dominion of Light is a series of nighttime landscapes with broad daylight skyscapes, showing day and night co-existing seamlessly in a single street scene. Magritte painted this subject more than a dozen times from 1949 to 1965. Since the artist’s death, however, no more than two have been exhibited together. This exhibition presents six of these works in an immersive gallery, marking the first time that this pivotal group of works can be experienced as a series.

The exhibition concludes with a final gallery exploring gravity and lightness, in paintings of gigantic floating boulders and flying birds that frame the sky. The juxtapositions in these mysterious and meditative works invite a reexamination of our basic assumptions of existence, space and time.

René Magritte: The Fifth Season, which follows the 50th anniversary of Magritte’s death, builds on SFMOMA’s longstanding relationship with the Magritte Museum in Brussels, Belgium, and was developed in partnership with the Magritte Foundation. The exhibition is also supported by a generous grant from the National Endowment for the Arts (NEA). The Art Works category is the NEA’s largest funding category and supports projects that focus on the creation of art that meets the highest standards of excellence, public engagement with diverse and excellent art, lifelong learning in the arts and the strengthening of communities through the arts.

Lead support for René Magritte: The Fifth Season is provided by Carolyn and Preston Butcher. Major support is provided by The Bernard Osher Foundation and Pat Wilson. Generous support is provided by Jim Breyer, Jean and James E. Douglas, Jr., Jacqueline Evans, Melinda and Kevin P.B. Johnson, Sir Deryck and Lady Va Maughan, the Lisa and John Pritzker Family Fund, Nancy and Alan Schatzberg, Lydia Shorenstein, Sheri and Paul Siegel and Kay Harrigan Woods. Additional support is provided by the Robert Lehman Foundation. This project is supported in part by an indemnity from the Federal Council on the Arts and Humanities and by an award from the National Endowment for the Arts.

Support for the exhibition catalogue is provided by Furthermore: a program of the J.M. Kaplan Fund.

René Magritte: The Fifth Season opening events are generously supported by Delvaux. La Maison Delvaux, official purveyor to the Royal Court of Belgium, is honored to support the legacy of René Magritte through this important exhibition at SFMOMA.

Private guided tours and group discounts for René Magritte: The Fifth Season are available through the SFMOMA Group Sales team. Tours are one hour in length and are not included with museum admission. Tours must be booked at least two weeks in advance. For more information or to submit an inquiry, please visit sfmoma.org/groups.

SFMOMA is dedicated to making the art for our time a vital and meaningful part of public life. Founded in 1935 as the first West Coast museum devoted to modern and contemporary art, a thoroughly transformed SFMOMA, with triple the gallery space, an enhanced education center and new free public galleries, opened to the public on May 14, 2016. In its inaugural year, the expanded museum welcomed more than 1.2 million visitors.