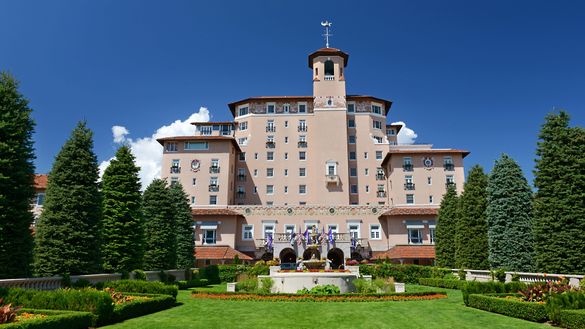 Colorado Springs, Colo. –When the legendary Broadmoor officially opened its doors on June 29, 1918, the world was introduced to the jewel of the Rocky Mountains. The rest, as they say, is history – a history worth celebrating year-long.  During each month of 2018, the resort will commemorate a specific era in its history with special events, activities, and packages. Among these celebrations and events is a centennial gala dinner, a nod to the destination’s history and Colorado society, similar to the events the property hosted when it opened its doors.

On June 1, 1918 Spencer Penrose invited the most important people in the state and around the country to a special VIP opening of his new hotel. The private event hosted over 400 guests, including John D. Rockefeller, and featured music by the Boxhorn Orchestra. When the Broadmoor formally opened to the public, it did so again with a dinner dance attended by hundreds.

One hundred years later, on the exact same weekend, June 1-3, 2018, the Broadmoor is reliving the excitement, grandeur and fun of that time with two nights and three days of special events, excellent food, wine, Prohibition-era cocktails and dancing that harken back to that first time guests crossed the threshold of the Broadmoor and were in awe of what would come to be known as the Grande Dame of the Rockies. The centennial black tie gala takes place on Saturday, June 2. The evening’s menu highlights local Colorado-sourced ingredients and includes dishes such as wood-smoked Colorado red trout and grilled beef tenderloin and bacon wrapped jumbo prawns. The Centennial Gala Weekend Package is offered at $1,918 (double occupancy) and includes an elaborate Prohibition Party, history tours and lectures, and tickets to the gala dinner.

Recently acknowledged as a AAA Five Diamond property for its 42nd consecutive year, The Broadmoor is also the longest running Forbes Five Star resort. The legendary property is where the West begins – at the base of the Rocky Mountains in Colorado Springs. The Broadmoor encompasses 5,000 acres, has its own canyon with mountain waterfalls, and, if that’s not enough, operates a super-exclusive retreat called Cloud Camp on top of Cheyenne Mountain at 9,200 feet. Guests can try their hands at ranch life at the Ranch at Emerald Valley or pick up a rod and reel at Fly Fishing Camp on the banks of the Tarryall River. There’s a zip line experience that is longer than a championship golf course, and there’s a championship golf course where a guy named Jack Nicklaus won his first major title. The U.S. Senior Open will be played there in June, or guests may choose to tee up alongside legends like Hale Irwin and Davis Love III – experiences that can be arranged for those looking for something even more tailor-made to their tastes. On June 29, 2018, The Broadmoor will officially turn 100 years old. There will be fireworks and then the opening round of the U.S. Senior Open.

The more traditional resort is more like a resort campus, with 784 rooms and suites, including the new Estate House, a 12,000-square-foot mansion originally built in the 1930s that exudes a Gatsby-esque elegance and style. On site, there are 10 restaurants – including Colorado’s only Forbes Five Star and AAA Five Diamond Penrose Room – plus another 10 cafés and lounges; a Forbes Five Star spa; three golf courses; and award-winning tennis.

What was true in 1918 is still true today. Relaxed luxury mixed with Western hospitality is framed by scenic views and inspiring mountains. It is a destination that can arguably be called “The Most Unique Resort in the World.”